Mrs. Huizenga, that great big fun store on Roncesvalles, is happy to be back at the Leslieville Flea because the staff member who sets up the booth has a long history in the neighbourhood.

A L-ville resident of 12 years, Marla Good misses working at Winkel - the "little shop with a lot of stuff" that you might remember from days past. She's so happy to find herself working for what feels like winkel on steroids, that bringing her new digs home with her and sharing it with friends and neighbours at the flea feels a lot like a social event. Selling beautiful wooden benches with great patina, funky shoes, sterling charms and vintage photographs at the Leslieville Flea is as heady as sipping champagne when it's all so friendly.
Bringing the store's concept all the way over from 28 Roncesvalles to the East End isn't an easy task, since it's six thousand square feet of awesome treasures with ten creative employees putting together intriguing displays often featuring very huge and unique items in between lively auctions of unique and vintage items - but Mrs. Huizenga tries.
The Hookerson-Blough auctions held on every first and third Thursday each month at the store mean that it's revamped practically weekly. The store is never the same way twice, which is the only thing that's a constant there. And setting up at fleas around town works much the same way - each one has its own flavour and feel.
How a flea is done is like so: Look around, see what makes a collection, a colour story, a feeling, a style. This week, as we can see in the photos, the store is feeling a little arty, a little green and fresh and funky, so that is what might come to the flea. There's a rumour that the famous $10 clothing rack or $5 bin might make a rare appearance too. Put it all together and pack it in things that you'll also hopefully sell, and hope others fall in love with most of it too - we don't want to bring it back  home, you know. And after all, the store's tagline is "Selling nice things to nice people since 2005." 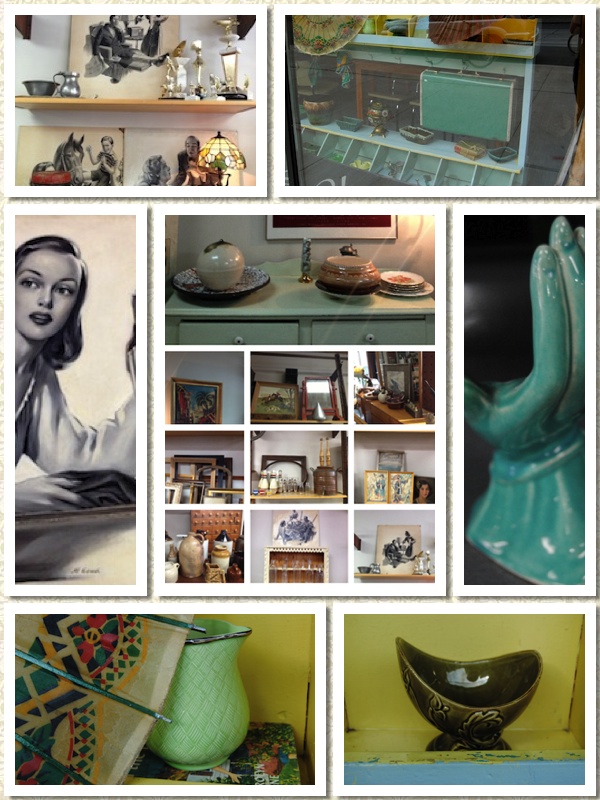 Posted by Chris Roberts at 6:38 PM

The Leslieville Flea is Presented By: